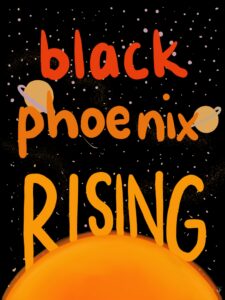 Black Phoenix Rising is a multimodal project in African American studies, sociology, and science and technology studies that explores Black people’s practices of resisting death and the creative ways they transform the symbolic meanings of life, death, and resurrection in Black life and culture. The course explores social theories and creative practices in the Black radical and aesthetic traditions that centers Black people’s everyday practices of resistance, through artistic expressions of self, freedom and solidarity and analyses the role of consciousness, spirituality, and affect in Black lives. Black Phoenix Rising builds on the figure of the phoenix as an organizing metaphor for Black peoples’ contestations with death and as a site for Black radical analysis. The phoenix is a mythological deity in the form of a large bird that symbolizes the cycle of life, death and resurrection. The phoenix dies and rises again through self-consumption or pyrrhic self-immolation; stories inspired by the Black phoenix remind us that death is not and never was the end for Black people. By telling the stories of Black people, real and imagined, who cut racism against the grain of death, Black Phoenix Rising counters the narrative that Black people’s only meaningful existence is death through politically and structurally informed creative storytelling.

View the projects & Watch this short video about BPR.